“It’s amazing how Cap’s popularity has never waned over the past eight decades. I feel that it’s a wonderful testament to the talent and skill of Joe Simon and Jack Kirby, who so brilliantly created such a fabulous artistic representation of the best of America.” – Stan Lee

With just 2 days until the release of Captain America:Civil War in the US, the movie I have been anticipating since Iron Man in 2008, I wanted to take the time to write briefly about why I have learned to love the character of Captain America. A character seen on occasion as boring and out of touch with the world today, some people have found him difficult to connect with in the Movies (That was until Captain America: The Winter Soldier came out, but even then, it has kind of reverted to the way it was previously), although he has endured in comic books for 75 years so he must be doing something right. And if you are one of the ones that sees Cap in such a negative light then I hope I can persuade you to a more positive perspective.

Captain America debuted in 1941, created by Joe Simon and Jack “The King” Kirby. His first issue showing the now iconic image of him punching Adolf Hitler . He was the embodiment of everything America was and was trying to be, the best of itself standing against the evil in the world. But after the end of the war he went into obscurity because without a war to fight Cap didn’t really have a purpose. He would be brought back in lackluster attempts to reintroduce the character including to stand against Russia in the Cold War but it didn’t amount to much. It wasn’t until 1964 that we would get Captain America introduced into the Marvel universe when discovered frozen by the Avengers and would eventually go on to become the long running leader of the team.

Honestly, though, I was never a big fan of his. I can understand those that aren’t fans of his because for a long time I was never drawn to him as a character. I knew of Captain America as a kid from cartoons or that awful 1990’s Captain America movie, but I never really read any Captain America comics growing up. I was more inclined to read Spider-Man, X-Men, or for a short while Fantastic Four. The first comic I really read that featured Cap heavily was the comic for Civil War, the comic that drew me into a deeper love of comics, but more of that with my movie review.

Although I started to delve deeper into Marvel’s comic book universe, I became more drawn to characters I had previously read about and became an avid reader of Deadpool as well as some of the DC Heroes too. In all honestly it was the movies that made me start to realize how great of a character that he was and that I should be taking more interest in what was happening with him. The Movies made me realize that it wasn’t about Captain America or the fact that he was a super hero or had super soldier serum in his body, it was all about the man that was behind the shield, it was all about Steve Rogers. 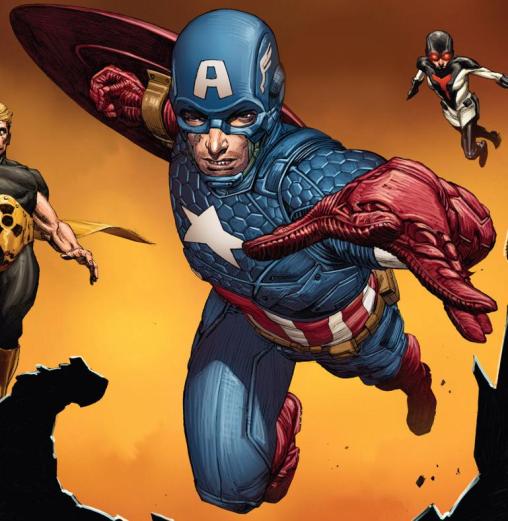 Let’s be honest, the Comic Book industry used to be a lot more about the art form and the creative aspects of creating a comic, today it has 1 over-arching guide – Does a comic book character sell comic books. Sales are what determine for Comic Book companies like Marvel and DC what their readers want, you want more of something then you have to buy it, it’s that simple. And as stated in the quite at the beginning of this blog by Stan ‘The Man’ Lee, Something about Captain America has kept people coming back for more for 75 years. Even though he slumped after World War 2, since ’64 he has been a main stay of Marvel and the sales prove that people want to keep reading about him, otherwise they wouldn’t be buying his comics, and if people weren’t buying then Marvel would stop selling his comics or change the character in some way to draw in readers.

But that hasn’t happened! As people are clawing towards R-Rated Superhero movies like Deadpool or Wolverine’s 3rd installment or looking for stories that are darker, edgier and grittier like Batman v Superman and the rest of the DCU or even Marvel’s Netflix series, such as Daredevil or Jessica Jones, Captain America comics are still selling strong whether in solo comics or in Avengers. His movies continue to do well, Captain America: The Winter Soldier is considered by many to be the greatest Marvel movie to date and Civil War seems set to take that spot as well as having advanced Ticket sales that are close to breaking records too.

Many do see Steve Rogers as an outdated hero, with morals and beliefs that really are out of place in the modern world and in the current superhero genre. Captain America is being made fun of in Age of Ultron because he tells Iron Man to watch his language and meme after meme has been made about him being a virgin based on Captain America: The First Avenger. But yet we are still spending money on his comics and on his films, most when asked to pick #TeamCap or #TeamIronman for Civil War are choosing #TeamCap. Why is this the case? In a world of dark and gritty Superhero movies and shows, including a dark and gritty Superman, why is Cap still at the peak of the Genre?

I believe because no matter how much we love grittier and darker stories, we are drawn to a beacon of light. I believe that Captain America represents the best part of each and every one of us. We all look at Captain America and wish deep down that we could be more like him, we desire to see ourselves becoming the best version of ourselves and stand by that in every situation we face. To have the bravery and courage to stand up against evil in the world, regardless of it’s face and take a stand not for any other reason other than it is the right thing to do.

And Steve Rogers embodied that long before he became a Super Soldier and donned the Stars and Stripes. He embodied that when he was a skinny weed of a kid from Brooklyn and that is what makes him great. His powers didn’t change or corrupt him or what he stood for. He wanted to be a soldier in World War 2 because he wanted to help fight against Hitler because it was the right thing to do and he has never relinquished that attitude and fight for the good in the world. His values may seem out of place now, 70+ years after the era that spawned them but that very reason is why it is so important that he upholds those values. In a world full of Anti-Heroes and heroes that honestly in a lot of ways are designed to be unlikable (See Tony Stark in the movies, he was written to not be liked and make people like him) Captain America represents something different and in all honesty rare these days. The belief of the best in ourselves and others and doing the right thing just because it is right.

This ideal has led Cap to stand against the wrong side and the evils that are in this world. And that isn’t even the foes America has had, as he has even clashed with American Government in comics and movies because he believed in the greater ideal for all of humanity and was unwilling and unfaltering in his commitment to reach for it and encourage others to do the same. Captain America doesn’t represent just an old timer trying his hand in today’s world, he believes in right and wrong and that we have a responsibility and a duty to do whatever we can to make a difference. Steve Rogers has stood against the greatest threats that the planet has faced whether super villains, mad dictators, his own government or alien threats from space. And has held to his ideals, his views and his goodness and never faltered from it. 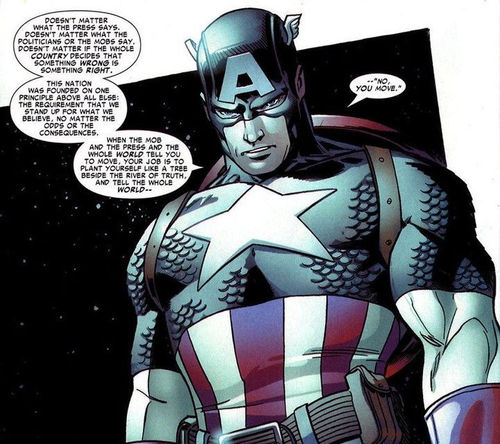 So many believe this to be why the character is unrelatable in today’s world and I think this is why he is so relatable. He is an everyday guy that wanted to make a difference, wanted to be the best version of himself that he could be, wanted to do it for no other reason that because it was the right thing to do and was given an opportunity to do so on a super heroic scale. He even upholds this ideal when he lost the super soldier serum in recent years and gave the Captain America mantle over to Sam Wilson (Falcon). It never changed who he was as a person, just like getting the serum didn’t change him in the first place. He still fought as he always had, just as a leader of the Uncanny Avengers and in more of a background role, as without the serum he became an old man and not as physically able.

How many of us can honestly say that we don’t want to make a difference in this world and leave a lasting impact to make the world better than it would be if we hadn’t been in it? How many honestly don’t want to reach our potential and become the best versions of ourselves we could possibly imagine? Whether you are a missionary working in Africa or a beauty queen or celebrity living the high life, you have some part of yourself that thinks and believes what you are doing is going to be of benefit to people. That is why Captain America is important and deserving of being a hero in our eye, not to be relatable on the level we are at but to show us that no matter where we are that these ideals can be reached and we can obtain what we hope to accomplish in life and reach our full potential. 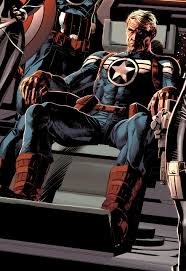 He refuses to move from what he knows to be right, even if he is standing alone. He, like the equivalent of Superman, is designed to inspire us to be more than we ever thought we could be. To reach for a higher ideal and a be the best of ourselves and not settle for the the everyday and mundane and not let evils in this world role off of our backs when we have the ability to stand and make a difference.

This is why so many read his comics and love his movies, and why I have no doubt that we will continue to do so for many years to come.

And Steve Rogers doesn’t show any signs of stopping in his 75th Anniversary with Captain America:Civil War either being released in a few days and with Steve Rogers regaining his Super Soldier Serum and taking up the mantle of Captain America again this month in the comics. Lets see Cap for what he truly is… Us at our best! And may we enjoy his adventures and continue to be inspired to reach that ideal.

Thanks for joining me on my ramble and check out my Captain America: Civil War Review which I will be posting after this weekend.

Please give the blog a like and leave a comment letting me know what you thought, did you agree, disagree or have something completely different to say then go for it!